Captain Planet and the Planeteers Wiki
Register
Don't have an account?
Sign In
Advertisement
in: Planeteers, Protagonists, Characters,
and 2 more

James Wheeler is the feisty and iron-willed bearer of the Fire Ring and the third Planeteer to be summoned in the first episode. When summoning Captain Planet, he is the second Planeteer to call out their element. He comes from North America (more specifically, Brooklyn, New York). He found his ring after saving a man from a thug that was trying to mug him. The ring then shot out from a flaming drum and landed in Wheeler's hand.

Wheeler has red hair and blue eyes. He's somewhat handsome and has a very muscular body. This can be seen in Population Bomb, Frog Day Afternoon, and Never the Twain Shall Meet. Many young females have often noticed this.

For the first five seasons, he wears a sky blue Planeteer shirt that has a yellow globe emblem on it and is usually half-tucked and half-untucked. His laces are rarely tied. He also wears blue jeans and a brown jacket with the sleeves rolled up. When he wind surfs, in the first season, he wears a pair of basic blue trunks. In the second season, when windsurfing, he wears a pair of blue trunks with yellow stripes. When swimming or partaking in other water sports, he wears a pair blue trunks with yellow triangles, he uses these , up untill season 5. Like the other planetears, he occasionally wears a wet suit or diving suit, but only for planetear matters.

In the final season, he wore a red Planeteer T-shirt with a green emblem under a brown vest, gold belt, blue jeans, and red and white sneakers.

Wheeler is all about action and does not always think things through before acting. He often goads the Eco-Villains, taunting them and infuriating them with quick remarks and insults. Although not necessarily lazy, he is often tempted to abandon work in order to have some fun. However, he is very loyal and can be counted on in a crisis if someone is depending on him.

Wheeler is athletic. He likes wind surfing, surfing although not particularly talented at ether sport. He also plays volleyball as well as basket ball. He surfs up until the end of the second season of the cartoon form this point on, wheeler seems to focused more on basket ball. In the comic he is depicted at being completely un-talented at surfing, losing to GI in a contest, who it is implied, taught him how to windsurf in the tv series.

Wheeler is usually the Planeteer who asks the questions or needs things explained to him. This is usually a tool to explain the situation or problem to the audience.

Wheeler often wants to have fun, rather than work, and takes pleasure in games and flirting with girls. He appears to have a strong crush on Linka throughout all six series of the show, though not to the extent he won't look at or flirt with other women.

From the moment he sees her, Wheeler makes no secret of his attraction to the beautiful Linka. He often calls her 'babe', and flirts with her heavily throughout several episodes. Linka, however, usually rejects his advances. Most of the time he accepts this with good humour, but occasionally he will question her further about going out with him, or he will display a hurt look, indicating that his feelings go deeper than simple flirting.

Several times, Wheeler and Linka come close to kissing during quiet, intimate moments with one another, such as in the episode Beast of the Temple. However, they are usually interrupted before they can kiss.

Occasionally Wheeler will flirt with other female characters, which causes Linka to become openly jealous. Whenever he is rescued from a tight spot, she displays obvious relief and is more open with her affections towards him.

Wheeler had a rough childhood. His father was an alcoholic, and his mother appeared passive in response to the aggression present in the home. Wheeler appears to be close to his mother - he returns to visit his parents in the episode Talkin' Trash, and he appears on good terms with her. However, he at first refuses to speak to his father, who verbally abuses him and indicates that he believes Wheeler is no good and will amount to nothing. But after being invited to see his son, Wheeler's father tells him he's doing good and they share a hug before Wheeler leaves.

During the episode A Mine is a Terrible Thing to Waste Part II, we learn that Wheeler often spent nights away from home, on the streets or in the park, even at a young age. This is because going home often resulted in conflict with his father, who sent him out to purchase alcohol.

The episode Talkin' Trash was based upon an idea by Joey Dedio, who voiced Wheeler throughout all six seasons.

The names of Wheeler's parents are never revealed.

Trish was Wheeler's girlfriend before he joined the Planeteers. He sees her again in the episode Talkin' Trash and discovers she is part of a gang vandalizing the neighbourhood. Trish successfully mugs Wheeler at the start of the episode without realizing who he is and steals his ring. He manages to steal it back, before trying to convince her to drop her criminal behaviour and take more pride in the place she lives.

Wheeler saves Trish's life after she sabotages Verminous Skumm's helicopter and falls into the river. He pulls her out and they share a kiss.

It is unclear whether or not the other Planeteers are aware of Wheeler's relationship with Trish.

Ma-Ti and Wheeler have a brother-like relationship as Wheeler often refers to Ma-Ti as "little buddy", "little bud", or simply "buddy". Ma-Ti often comes to Wheeler about women. Also, Ma-Ti sometimes joins Wheeler in shirking off. Wheeler often hugs him when he comes back from peril.

Despite not being as close as Ma-Ti, Wheeler and Kwame have a stable friendship. Kwame often comforts Wheeler and Wheeler explains modern things such as women and gangs to Kwame.

Gi and Wheeler have a strong friendship. She taught him how to windsurf and teaches him about the sea life and marine conservation. 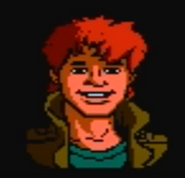