Mission to Save Earth Part II

Mission to Save Earth Part II is the twenty-third episode in the first season of Captain Planet and the Planeteers.

Continuing from the previous episode, Captain Pollution attacks the powerless Planeteers, but thanks to Commander Clash, they are able to repel him. Working together and realizing the truth of the matter of things, the Planeteers must get their rings back. Upon retrieval of their rings, they summon Captain Planet, where he and Captain Pollution engage in an elemental battle.

Captain Planet: Countries spend billions of dollars on armies and weapons to defend themselves from one another.
Gaia: But Earth faces a more serious and cunning enemy.
Clash: The enemy is pollution. Let's use our money, people and time to help stop this threat to our survival.
Kwame: Let us make it a mission.
Clash and the Planeteers: A mission to save Earth!
Captain Planet: The power is yours! 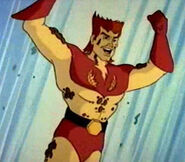