Captain Planet and the Planeteers Wiki
Register
Don't have an account?
Sign In
Advertisement
in: Characters, Plunder Family, Villains, Males

Looten Plunder is one of the Eco-villains. He considers himself a suave businessman. He rarely gets his hands dirty, instead, he prefers relying on others to do the dirty work for him while he watches from afar and profits from the results Looten represents the evils of unethical business actions.

Money is Plunder's main motive. He often finds corruption and weaknesses and exploits them for his own gain. Plunder doesn't care about human or environmental suffering, so long as cash continues to enter his pockets.

He tries his hand in most things - illegal hunting and poaching, deforestation, habitat destruction, and nefarious exploitation of technology.

Plunder obviously has a large supply of money and support, often using radical and advanced technology, as well as having many people willing to follow him and do his bidding. He has only one regular sidekick, Argos Bleak (see below), but Plunder's power extends to many, and it is evident he has the personality and the means to get people to follow him.

Aside from his duty to Bleak and the Pinehead Brothers, Plunder seems to have no sense of honor or loyalty. He has often teamed up with the likes of Hoggish Greedily or Sy Sludge, as was typical of the episodes alternating between a single Eco-Villain or two or more Eco-Villains working as a team. However, Plunder would even go so far as to betray the other Eco-Villains if he saw a greater advantage for himself or if the situation got too hot for him to handle.

Stereotypical of businessmen during the late 1980s/early 1990s, Plunder has shoulder-length brown hair pulled back into a ponytail. He is usually seen wearing an exceedingly gaudy pine green suit trimmed with tiger-skin print lapels. Sometimes the print is a natural tiger orange, but on numerous occasions, the print has been an even gaudier hot pink. He is often seen wielding a cane.

Bald and extremely muscular, Bleak handles the dirty work Plunder steers clear of. It is usually Bleak who takes care of the Planeteers by tying them up or trapping them somewhere in order to prevent them from stopping Plunder's latest scheme. Bleak dresses in an open black leather vest and combat pants. He favours heavy boots.

Bleak has a thin black mustache and an accent - which some fans of the show refer to as Australian, and other fans think British. 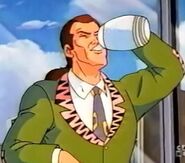 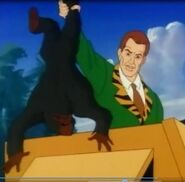 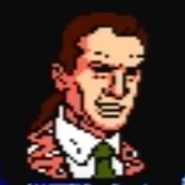