Hoggish Greedly is one of the Eco-Villains and the first villain Captain Planet and the Planeteers encounter in the series. Greedly represents overconsumption and greed. He was voiced by the late Edward Asner.

Like Verminous Skumm, Greedly has an animal-like appearance and tendencies, largely resembling a hog (which is an adult pig). Greedly makes references to this himself upon occasion, comparing himself to bacon or pork, usually prompted by Captain Planet: "He can still fry our chops."

Greedly has a wild and snorting laugh, which continues on for several seconds. He also snorts and grumbles when he is afraid or panicked.

Greedly has pink skin, small, fanged teeth, and an upturned nose. He has a thin mohawk of reddish-brown hair on his head and pointed ears. He is incredibly fat, and is often found stuffing his face with any available food. As a sign of authority abuse, Greedly wears green military fatigues with combat boots, a leather webbing belt and his uniform topped off with a black-tie.

Like a pig, he loves to pollute, using his vast wealth to acquise complex pig-themed polluting gadgets. He has a distorted sense of vanity (fat pride), and is an inveterate glutton, even eating a small fish that was originally destined as lunch to his henchman, after Greedly himself ate a big fish. He does not appear to be very brave - once Captain Planet arrives, he often resorts to begging or pleading, usually desperate to be saved from his own plan, which has backfired. However, he throws his weight around and can be very cruel as he has attempted to harm the Planeteers on more than one occasion.

Greedly has a son - Hoggish Greedly Junior, who has a crush on Linka in the episode Smog Hog. During this episode, Junior falls ill due to his father's polluting ways. The Planeteers convince Greedly to shut his polluting car factory down. It appears as though Greedly is not a completely unfeeling individual. In fact, he is willing to give up his car factory without resistance for the sake of his son's health.

Greedly descends from Don Porkaloin, who was a villain generations ago. Another group of Planeteers were forced to face him. Gaia tells this story in the episode Hog Tide.

As both of his family members have very similar biology to him, it appears that his mutation of pig features is hereditary, and has been carried over since at least from his grandfather.

As a baby in Hog Tide 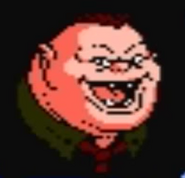