Duke Nukem is one of the Eco-Villains, a radioactive mutant who thrives on radiation and toxic waste materials. Duke Nukem represents the misuse of nuclear power. He's the only villain, aside from Zarm and Captain Pollution, to have powers of his own, in which he generates radiation to fire off radioactive blasts from his hands. He's also dangerously radioactive, enough to be considered a walking disaster area, which is why his sidekick, Leadsuit, always wears a radiation-blocking suit of lead whenever around him to protect himself from the radiation.

It is not known, nor is it revealed, at any point in the Captain Planet cartoon series, exactly how Nukem was first mutated, but ever since then, he plots to turn the Earth into a giant, radioactive zone for him to thrive in as well as turn everyone else in the world into mutants like him. Both Doctor Blight and Kwame refer to him as "Dr. Duke Nukem." What his doctorate is in is unknown; presumably nuclear physics or a similar area.

Duke Nukem is a radioactive mutant. He has hard, yellow, scaly skin. He only has three fingers on each hand and two toes on each foot. Nukem is usually found wearing an unbuttoned Hawaiian shirt and a pair of board shorts, as well as a pair of flip-flops. He has a short, red mohawk.

Duke's glowing green eyes provide him with x-ray vision. His voice is deep and rather hoarse.

Leadsuit: Leadsuit's name defines his appearance - he wears a full-bodied lead suit in order to withstand the radiation released by Duke Nukem’s body. Leadsuit is timid, rarely arguing with Nukem (and always losing if he objects to anything). Leadsuit is afraid of the dark and usually gives in at the slightest trouble. 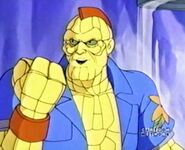 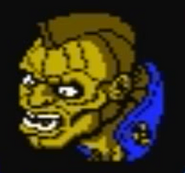 Duke Nukem in a boss fight
Community content is available under CC-BY-SA unless otherwise noted.
Advertisement