Captain Planet and the Planeteers Wiki
Register
Don't have an account?
Sign In
Advertisement
in: Villains, Females, Characters,
and 3 more

Doctor Barbara "Babs" Blight, one of the Eco-villains, is a beautiful scientist, often found experimenting in various ways regarding how to take over the planet. Blight represents the dangers of out-of-control technology and unethical experimentation.

She has shoulder-length blonde hair with a distinctive white streak of hair acting as a blackout curtain to cover the horrifically scarred left side of her face. Though the origin of the scar that also resulted in the loss of her left vision was never revealed in the show, it was revealed by the Dr. Blight Collector Card that she had experimented on herself to make the perfect human, and therefore it is possible that the scars were a side-effect of her attempts.

Due to her hair being carefully combed in front of her face to hide her disfigurement, at first glance, Dr. Blight is a beautiful, white, blonde, slim blue-eyed woman, However, on occasions where her full face is shown, her scars were revealed to be of a darker-toned, rough, and scabby appearance, covered with numerous boils along with a long dark scar trail running down her scarred cheek, starting from just below her empty left eye socket. In later episodes that feature her in the future, her appearance was shown to have become saggy and crone-like.

Though it was never specifically revealed or confirmed, whatever caused Dr. Blight's scarring was likely to have inflicted excruciating pain on her as well, and perhaps contributed to her insanity.

Dr. Blight seems to have mixed feelings toward her facial scarring. In some episodes, such as The Energy Vampire and Losing Game, she has no problem showing the scar and seems almost proud of it. However, in other episodes, such as You Bet Your Planet and Frog Day Afternoon, she seems to be self-conscious and humiliated by it. These sorts of contrasting feelings seem to be common in other areas of Dr. Blight's life as well. Another example is her relationship with MAL. At times, she will be very fun and flirtatious acting toward MAL, while at other times she will become angry and violent when dealing with him. She also seems to display the same extreme range of emotions when dealing with the other Eco-villains or with Captain Planet and the Planeteers. Blight descends from Betty Blight, who appears in the episode Hog Tide. Blight also has a little sister, Bambi Blight, a beautiful Hollywood film star. She stars in the episode Hollywaste. It's evident that there is great tension between the sisters. Bambi Blight was the first person to reveal Dr. Blight's first name when she referred to her as "Babs" a shortened form of the name "Barbara". Blight will often flirt or flatter in order to get her way, though she's not afraid to stand up for herself if one of the other Eco-villains dares to upset her. She often supplies chemicals or machinery and technology to the other Eco-villains in exchange for cash or favors.

MAL: Blight is never seen without her main sidekick and computer husband, an electrical program named MAL. They often share banter or argue against one another when things go wrong.

Blight often speaks in a slow, sultry voice to her computer, indicating perhaps that he is the only "man" in her life. When she teamed up with Sly Sludge to falsify his records as well as those of the Planeteers, she admonished Sludge for calling MAL ugly, and also mentioned if she could find a human being with MAL's intelligence, she would marry him. However, there are also indications there could be a secret relationship with Looten Plunder.

Blight's relationships with her family are complicated, to say the least.

She appeared to have an often-tumultuous relationship with her younger sister, Bambi Blight, implied to be the result of a long sibling rivalry from their childhood. Unlike Blight who chose to dedicate her life to science, Bambi, having been gifted with natural beauty, eventually became rich and famous as a model and actress. Something which Blight greatly resents due to her own badly damaged face.

In an alternate timeline, Blight would give birth to a girl, Betsi Blight. Betsi proved to be very different in personality from her mother, unlike Blight who believed in science and using it to cause worldwide disasters, Betsi was a kind-hearted woman (much like her mother's old enemies, the Planeteers) who believed in the gifts of nature and preserving life rather than destroying it.

These conflicting worldviews would eventually cause the two to have a falling out. The two would end up clashing several times as a result with neither side willing to back down or let the other win. By the end of the episode however, Blight does begin to contemplate reforming for her daughter, suggesting that she does genuinely love her deep down.

Blight's most positive relationship appeared to be with her grandmother Betty Blight, who appeared to share her granddaughter's love for science and twisting it to suit her own purposes. Indeed, it's likely that Betty was probably the one who inspired Blight to go down the same path.

Blight would also meet one of her distant descendants, the much more megalomaniacal Blight 5, and becomes very impressed after hearing about the dystopian future that she and her partners rule over. Blight agrees to help her find and kill a young girl who if allowed to live, will one day grow up to change the future for the better. Unfortunately their plan fails and Blight 5 along with her future are seemingly erased from history much to Blight's absolute fury.

Dr. Blight's scar is occasionally rendered inconsistently - most episodes will depict her with her left eye missing, however in some episodes she is shown with an eye intact such as in A Perfect World (after being electrocuted by the console after MAL sneezes on it), Little Crop of Horrors (when she turns around in the cockpit to scold Mal) and in Frog Day Afternoon (during a close-up of her scar in a hand mirror). 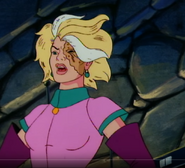 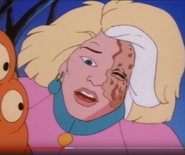 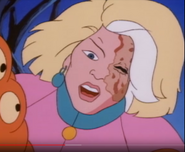 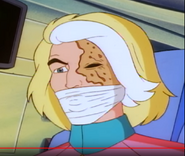