Captain Planet and the Planeteers Wiki
Register
Don't have an account?
Sign In
Advertisement
in: Article stubs, Protagonists, Characters,
and 2 more

This article is just a stub. You can help Captain Planet and the Planeteers Wiki by expanding it.

He is created by the five elements of the Magic Rings Gaia had invented. The elements that are used to create him are Earth, Fire, Wind, Water, and Heart.

Captain Planet has a long grass-green mullet and earthy brown eyes. His skin is crystal blue, and he wears a wide red collar that covers most of his chest, nape, and shoulders and has a yellow globe sign on it, red gloves, red trunks that have a black belt with a gold buckle on the front, and red boots. But in his very first appearance, his boots were missing for the first two episodes. In the episode 'Future Shock', a futuristic version of Captain Planet appears, sporting the same colour of skin and hair, but his uniform is blue with red accents, and he speaks in a semi-deeper voice.

Captain Planet has a strong sense of humour and frequently makes puns and comes while taunting the villains. He only really refrains from joking if he's dealing with a serious situation that requires an equally serious demeanour, most notably the episode Mind Pollution that dealt with drug addiction. He is also highly altruistic and is quick to rescue anyone in trouble, including his eco-villain enemies--on numerous occasions, he has saved various eco-villains from dangerous situations, and he almost never harms them even when provoked. The major exception was Captain Pollution, who left Planet with little choice but to fight him to the death on both occasions they met.

Much like Gaia, Captain Planet serves as a mentor to the team. Despite his own enormous power, he repeatedly reminds the Planeteers that their true power comes from within and they have the potential to succeed even without their rings. In Greenhouse Planet, when he was temporarily stripped of all his powers except Earth and Heart (due to Kwame and Ma-Ti being in outer space and their powers bouncing back to him), he practiced what he preached and managed to rescue Wheeler, Linka and Gi through conventional means rather than using his normal power. In addition, he stresses that the ultimate responsibility of saving the planet rests with the people of Earth, rather than with him.

Captain Planet's abilities are never clearly defined within the show, allowing him to always have a way of defeating his enemy and solving the problem before him.

Captain Planet's origins and history prior to the show are unknown, but he is clearly an ancient entity; Zarm was aware of him in The Conqueror, despite having been exiled from Earth for eons. Gaia hints in one episode that the Planeteer rings may have been used, and Captain Planet summoned, in a previous generation. However, what is known for sure is that at the beginning of the series, Gaia assembles a modern-day group of young people from several nations to serve as ring-bearers of the five magical rings. When the modern-day Planeteers combine their powers to summon the elemental warrior, this incarnation takes on the appearance of a superhero named "Captain Planet".

The Planeteers first meet Captain Planet in the first episode A Hero for Earth when they are brought to Hope Island. They must stop Greedly from polluting the earth. Planet defeats Greedly and tells the Planeteers to call him when they see Greedly again.

Captain Planet rarely has much time to interact with the team on a personal level, as his main function is to save the day and return to the rings. However, as discussed above Captain Planet serves as a mentor to all the Planeteers, and appears to see himself as a father figure to them. He has strong attachments to all the Planeteers and to Gaia and has demonstrated unusual anger when they've been threatened or harmed. In Mind Pollution, when Verminous Skumm succeeded at getting Linka addicted to the drug Bliss, he was especially enraged and noticeably devoid of his trademark sense of humour. 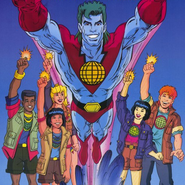 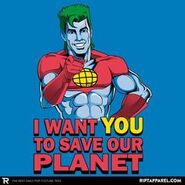 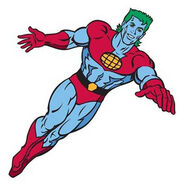 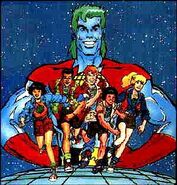