'Teers in the Hood is the twenty-second episode in the fourth season of Captain Planet and the Planeteers.

The Planeteers go undercover as gang members of two warring gangs to uncover the culprit who shot one of Gi's close friends.

After an opening of an inner-city school teacher explaining the civil rights movement and the peace messages of leaders like Martin Luther King, Jr., John F. Kennedy, and Mohandas Gandhi, the scene cuts away to a shoot-out in a parking lot at night between two local gangs, the Evil Educators and the Wrecking Crew. Ronnie, the brother of Wrecking Crew leader Main Dog, is caught in the crossfire. The same school teacher seen earlier pulls up in a car to save him, and it seems neither side wants to hit Ronnie or the teacher. However, an unknown figure shoots the teacher, and Ronnie calls for help.

The teacher turns out to be Gi's friend, David King, who is now in critical condition at the hospital. The Planeteers have come to the school posing as ordinary students in hopes of finding the culprit behind the shooting. Between classes, they witness a fight between Main Dog and an Evil Educator in a chemistry classroom, and during the fracas, some chemicals fall to the floor. Smoke fills the room, and the Planeteers are forced to summon Captain Planet to resolve the emergency. Once that's done, they discuss plans and Ma-Ti notes that he's become friendly with Ronnie, who witnessed the shooting. Wheeler, who is from the inner city and familiar with gang violence, warns that two rival gangs warrants caution.

Later, it is revealed that Ronnie is good friends with Julie, the sister of Evil Educators leader Clayton. After school, Clayton and another gang member confront Julie about spending time with him. During the confrontation, the Planeteers stage a fight designed to make them appear sympathetic to the warring gangs. Kwame tries to stop Clayton, and then Wheeler tackles Kwame. After the altercation, Clayton believes that Wheeler and Gi are friendly to the Evil Educators and he invites them to spend time with the gang. Meanwhile, Kwame and Linka are later shown to win the trust of the Wrecking Crew.

Tensions between the gangs continue to worsen, with Ronnie in the middle of it. The Evil Educators, including Wheeler and Gi, confront Ronnie and chase him through the school at one point, eventually grabbing him. Clayton asks Wheeler to "take care of" Ronnie; Wheeler cannot do this, so he tries to talk Clayton out of killing Ronnie. Kwame appears and confronts Wheeler, again posing as pro-Wrecking Crew. The full Wrecking Crew gang then arrives, forcing the Evil Educators to retreat, and Ronnie notes that Kwame protected him. Later, Ronnie and Ma-Ti go missing. Both Julie and the Wrecking Crew accuse Clayton of being behind Ronnie's disappearance, which he denies. Main Dog's enforcer says that if Ronnie's not returned, the gangs are going to have a rumble. Meanwhile, Ronnie and Ma-Ti are shown tied up in an abandoned building, which their captor sets on fire.

Soon after, at an abandoned water park, the two gangs face off. Before any fighting begins, though, both sides are shocked to see Julie show up. As the remaining four Planeteers try to keep the tension from escalating, Julie speaks up and exclaims she knows who shot Mr. King. One of the Evil Educators points a gun at her, which Wheeler sees; he uses his ring to knock the gun away. Julie confirms the Evil Educator in question, Zap, was indeed the shooter. Zap goes to Julie with a knife, and a vengeful Gi uses her power to force Zap into a water pool. She appears willing to drown him until Wheeler reminds her that doing so is how the gangs behave and she's better than that. Recognizing that Wheeler's right, she stops using her ring and breaks down crying.

Both gangs turn on Zap, demanding to know where Ronnie is. Zap says that it's too late and points to a fiery glow in the distance. It's the fire he set earlier, and Ronnie and Ma-Ti are still trapped. Ma-Ti is able to get his arm free to contact the Planeteers, and they summon Captain Planet. Planet saves the two from the burning shack, but by now the fire has spread to other houses. Using water from the park, Captain Planet is able to quickly douse the entire fire. Once the fire is out, Julie rushes up to Ronnie to see if he's alright, only to be confronted by Clayton once again. This triggers a clash between Clayton and Main Dog, but the Planeteers quickly intervene and remind them of all the destruction their conflict has caused, urging a truce. Captain Planet hammers it home by telling them: "Peace or war. It's your choice!" The two leaders initially appear to choose war and point their guns at each other, but they're shown to reflect on the civil rights movement and how its leaders hoped for peace and nonviolence. They end up throwing their guns away and shaking hands. As for Zap, Clayton says they'll let the justice system decide how to discipline him.

In the episode's last scene, Gi happily announces to the other Planeteers that Mr. King is going to make it. She pushes him out of the hospital in a wheelchair, and King says he's especially happy about the truce between the two gangs. It's pointed out that Ronnie and Julie have proven that people from different backgrounds need not be enemies, and King proudly notes "now that's a lesson worth learning!"

Wheeler: Environments aren't just where plants and animals live. Wherever you are is an environment, whether it's your bedroom, or school yard...and your environment is more than the physical things around you; it's also about people, and how they interact. People who sell drugs and fight create a negative environment, but if those same people change their attitudes, they can help create a healthy environment.
Captain Planet: Don't be part of the pollution, be part of the solution. The power is yours!

Ma-Ti: Today's wasteful habits can become tomorrow's problems.
Kwame: But there are easier ways to conserve our planet's limited resources.
Wheeler: Mop up spills with sponges instead of paper towels.
Gi: Save paper that's used on one side, and use the other side for phone messages.
Linka: Pack your lunch in a reusable container; in a year, you will save hundreds of bags!
Kwame: See, you and your friends can come up with other ways to reduce, re-use, and recycle.
Group: The power is yours!

Mr. King: Can you imagine getting on a bus, and being ordered to go to the back? What would you do if you could only enter a hotel or restaurant through the rear entrance, unwelcome to come in the front? You take these everyday routines of life for granted. But some very courageous and brave people gave their lives so you would have the right to eat where you want. Ride in front of the bus. Go to the school of your choice, live in the neighbourhood of your choice. You think it's simply your right to make these choices, but it's much more than a simple right. I'm talking about civil rights. You might not be sitting in this room today if not for the courage of Frederick Douglass and Harriet Tubman who fought for the freedom of slaves. This man, Mahatma Gandhi, was the inspiration for the modern-day nonviolent movement, a movement that inspired the likes of such leaders as Rosa Parks, Martin Luther King, Nelson Mandela, Cesar Chavez, Chico Mendes. They wanted a better world for you. And we will forever miss John F. Kennedy, Robert Kennedy, Malcolm X. You are the future they lived for. Dreamed for, died for. But their hopes and dreams are not dead--if you stop the violence. Stop the gangs, stop the killing, stop the crime, declare a truce, and share the dream of a better, happier life.

Gi: You're just as guilty as Zap. Maybe you didn't pull the trigger or start the fire. But you may as well have. As long as you continue telling your gangs to use guns and violence, you're to blame too. Can't you see? It's time to stop wrecking, and start really educating! And the first step is a truce. 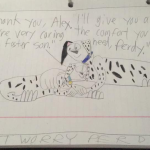